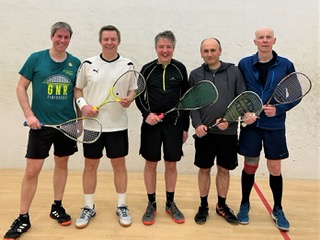 Hexham Squash 1st team clinched Northumbria Div. 2 title with a convincing win over Northern.  With a full team Hexham kicked off the evening with captain Jeremy Phillipson playing at No.3 against Simon Babb. Jeremy was looking particularly lively after his winter holiday break.  After a close first game Jeremy’s pacey game proved too much running on to win 3-0.  Regular Paul Satow had an unusually slow start against tricky player Neil Atkinson losing the first game.  He soon rallied with his seasoned volley drops to take the next 2 games and looked on course for the win. Neil fought back and just took the fourth 15-14. Paul’s experience counted as he regrouped to take victory 3-2.

Adrian Alderton took on Paul Bell and was warmed up raring to go for a change, racing to a 15-6 lead.  Playing some of his best squash of the season the veteran dominated with his volleys despite good rallying from his opponent to take a 3-0 win.  Damon Watts returning from injury played a measured canny game against Ben Catternach.  Damon’s controlled length and drop game was too much for Ben so completing an impressive 3-0 win.  Tom Ewen playing No.1 had a tricky match against awkward opponent Drew Patterson. In a scrappy game Tom maintained his usual composure in some tight games.  Taking two close games 15-14 Tom managed to hold Drew at bay for a 3-0 win. Hexham 1st team take the Div 2 title with only one loss this season and two games remaining.

Hexham 2nd team remain mid table in Div.3 after being pipped 3-2 at Chester-le-street, the pick of the games being Guy Jepson returning from a longstanding injury to beat Emma Leith 3-2 in an epic battle. 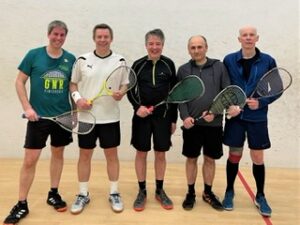